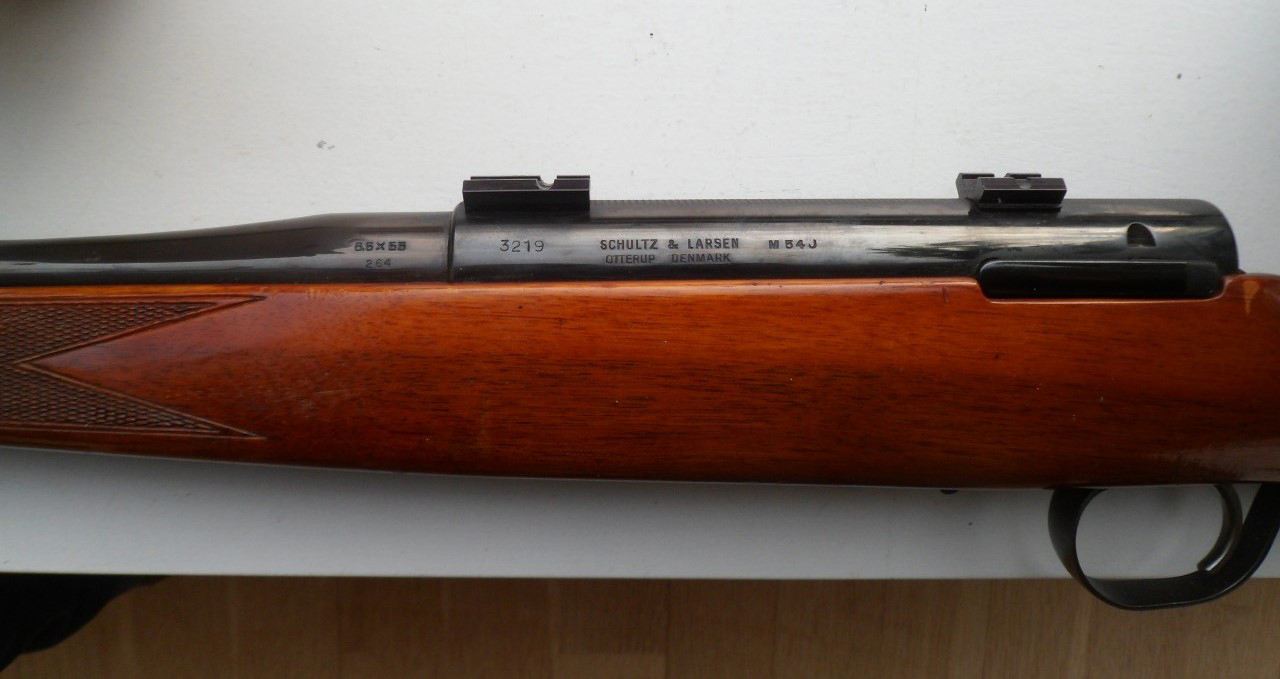 Philip Sharp and the M54J

Captain Philip B. Sharpe is an American soldier during 2nd. World War, and by the end of the war he ’liberates’ a French rifle in order to bring it back to America. It is a 7mm with a fairly large case volume, and he is very interested in further developing the capabilities of the 7mm cartridge.

Back home in the US, he settles down on a farm in the country side, builds himself a reloading room and starts working with the cartridge with his friend Richard Hart. They base the cartridge on a .300 H&H case. The mission of Sharpe & Hart is to create a magnum caliber, capable of shooting at far distances….

During the 2nd World War a lot of new powders were developed, each with different qualities and characteristics. A lot of these powders were tried and tested. In the summer of 1952, Sharpe & Hart had a visit from Scandinavia.

Amund Enger, the CEO of the Norma Oslo factory spent more than a week with Sharpe & Hart developing the cartridge, and by the end of his stay he promised Sharpe & Hart to develop and produce brass for this project. Amund Enger was very impressed by the concept and abilities of the new cartridge.

So an agreement was made, Norma produced the brass and contacted Schultz & Larsen in Otterup to ask them to supply barrels for the testing of the cartridge. Schultz & Larsen had been supplier of testing barrels to Norma for years and was the natural source to go to.  The new cartridge was named 7×61 Sharpe & Hart.

Sharpe went to Scandinavia in 1953 to visit a number of gun manufacturers and he became particularly interested in the rather small operation in Otterup, Denmark. Deals were made, and the development of a new hunting rifle was in its prime…

Based on the design of the M38 from Schultz & Larsen

For Schultz & Larsen the timing was perfect, as they were celebrating their 50 years’ anniversary that year. They also celebrated the marketing of their first hunting rifle. The M54 was a rifle made for competition, the M54J for hunters (J stands for the Danish word jagt, which means hunting, and this rifle was supplied with a safety button and magazine as opposed to the M54 that was without these safety devices).

The rifle was based on the design from the Schultz & Larsen M38, a beautiful and well crafted rifle. Schultz & Larsen built a number of M54J 7×61 Sharpe & Hart rifles and sent them off to the US, where they soon obtained great fame because of their high quality and superb precision. The caliber was small but highly effective, and famous hunters from all over the world quickly adopted the rifle.

An end to the American adventure

However, the production of the high quality rifles was time consuming, and other gun factories were fast to catch up on the fame of the 7×61 S&H cartridge. Cheaper rifles and similar cartridges at a faster pace was soon produced at much cheaper prices and this affected the sale of the M54J considerably.

Remington was extremely “quick on the trigger” and developed a close match to the 7×61 S&H, namely the 7mm Remington Magnum. The cartridge 7 mm Remington was slightly bigger than 7×61 S&H and held more powder.

At the same time Remington produced a cheaper rifle for their new cartridge and that put an end to the American import of the M54J rifles.

In the picture below you see Amund Enger, Phil Sharpe and Niels Larsen, at a lunch meeting in a restaurant in Copenhagen. 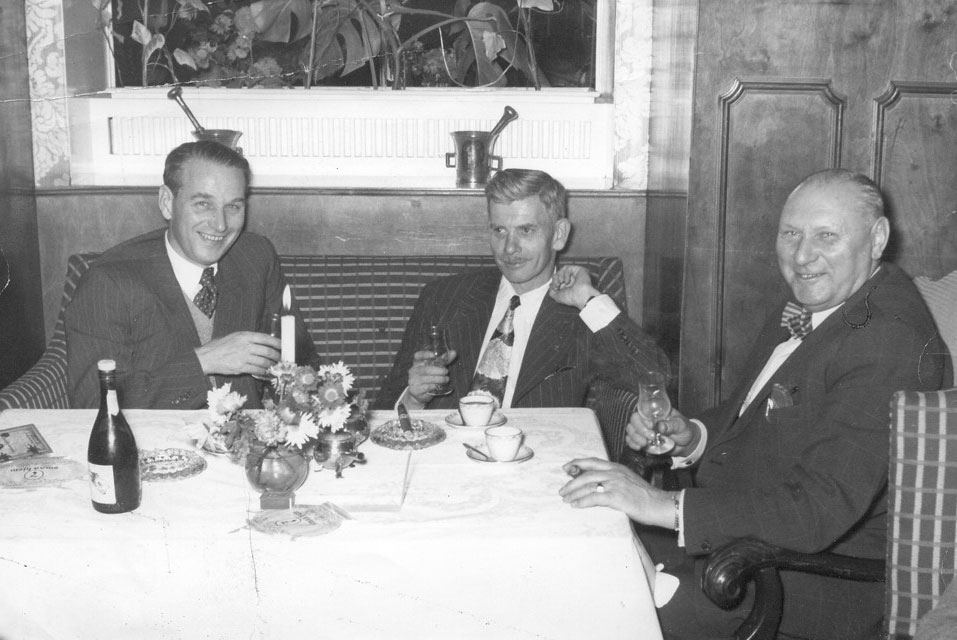 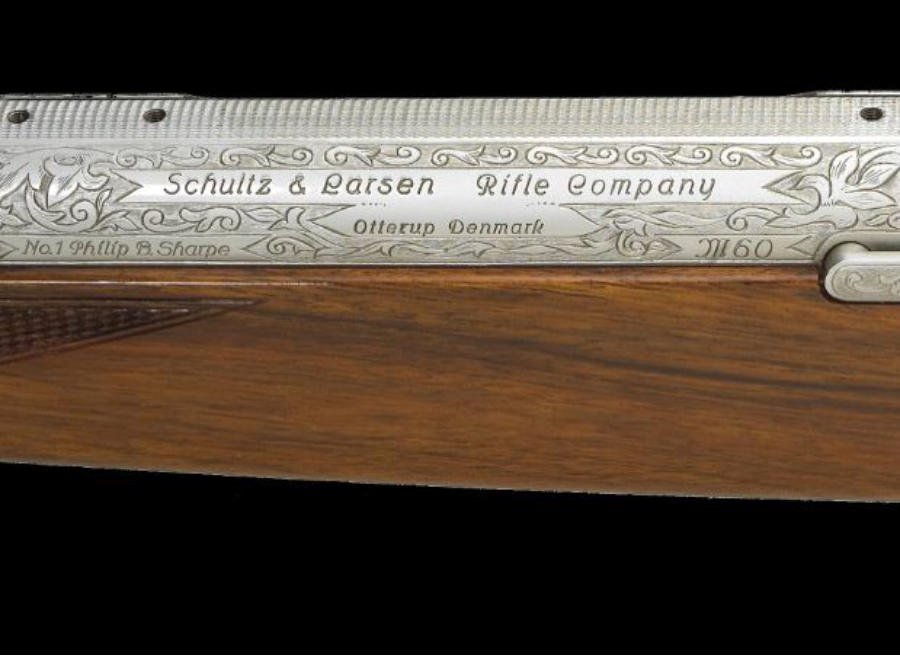 Below: An old invoice from Sharpe & Hart Associates, Inc. 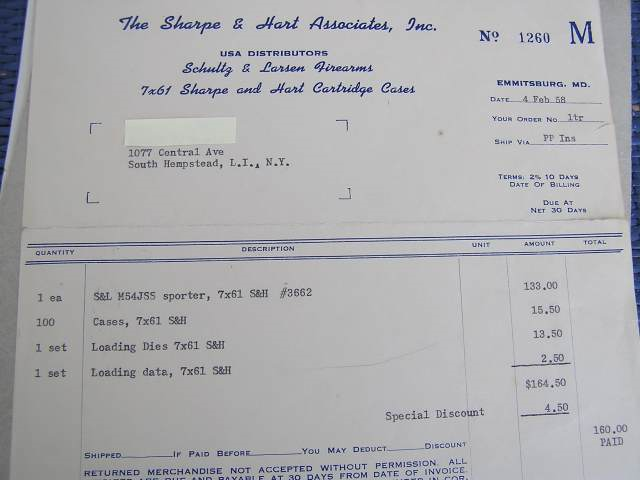 Today the 7×61 Sharpe & Hart is a caliber only for reloaders. Norma still produces brass, but no factory made ammunition is made for the cartridge. Reloading data can be found on the Internet or at Hornady where you can also find tools and dies for the cartridge.

The 7×61 S&H, the .300 Win Mag and the 7 mm Remington Magnum are very similar in performance and all three are relevant when shooting at far distances. They apply to experienced hunters hunting game difficult to approach, in mountain regions and such.

As a matter of fact the smaller caliber .243 Win has the exact same trajectory as the magnums mentioned above. Off course you cannot hunt the same sized game with a .243 Win – but it is truly a fine and effective caliber and in many countries you are allowed to hunt both red deer and Sitka deer with the family small caliber .243 Win.

It is appreciated by many hunters in Scotland and in  the US for its efficiency and low recoil, which off course is far less than the recoil perceived from the 7×61 S&H, the .300 Win Mag and the 7 mm Remington Magnum 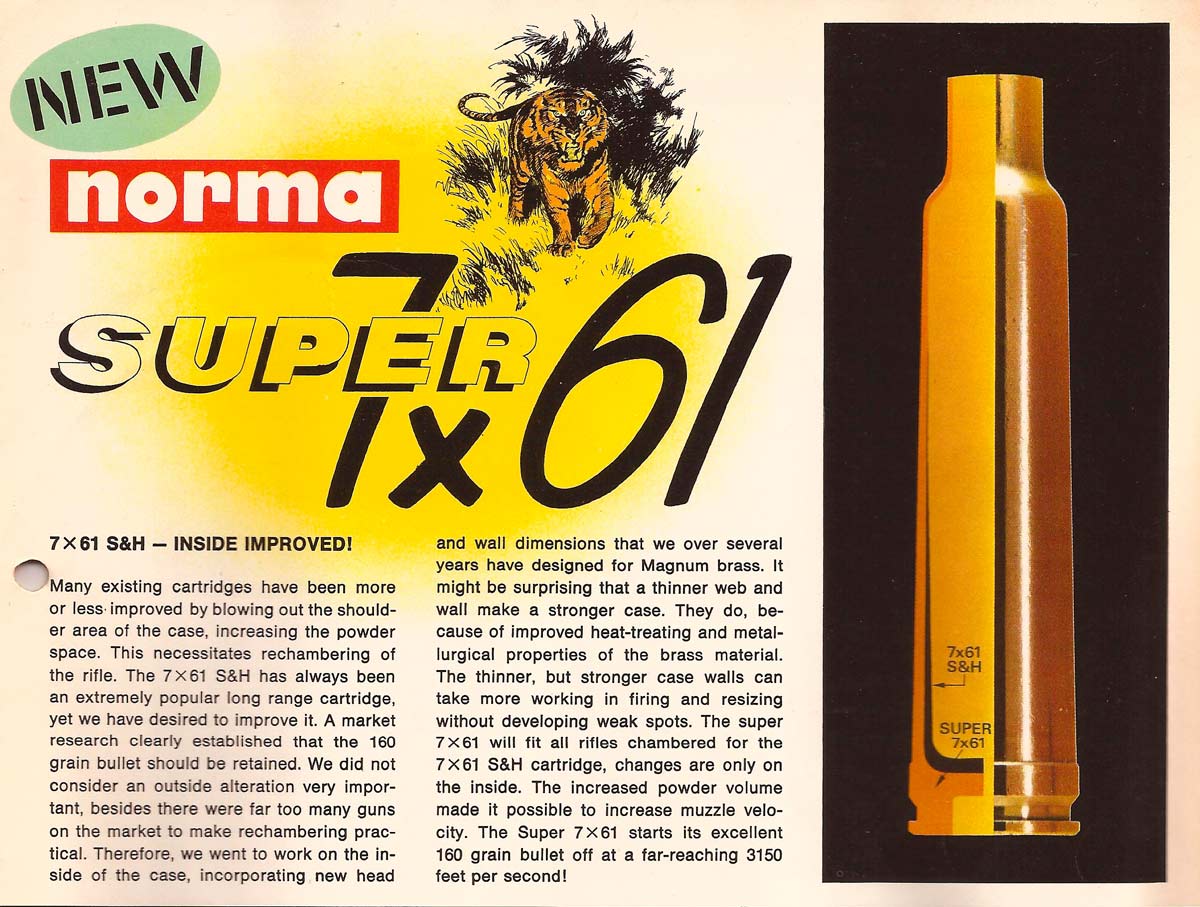 This article is a cooperation between The Professor and Krudtmama – translation assistance J. Lundbeck